The English River Watershed (ERW) is a 639-square mile watershed that encompasses parts of six counties in Southeast Iowa. The ERW is part of the Lower Iowa River and is characteristic of an agricultural watershed within the Southern Iowa Drift Plain. This landform is typified by an undulating landscape with tabular uplands and a complex dendritic network of incised river and stream valleys. The ERW is an agricultural watershed that is home to about 21,700 people, the majority of whom live in several small communities. Most of the farmland has been modified with tile drainage and two-thirds of the landscape is in row crops.

Heavy rains in April 2013 resulted in the English River at Kalona cresting at 22.47 feet, the second highest crest for the river at that location. In Iowa County, nearly 38 miles of roads in the ERW were washed out. In 2013, the English River Watershed Management Authority (ERWMA) was formed to address flooding and water-quality issues. The IDNR awarded the ERWMA a grant through the Section 319 program to develop a comprehensive watershed management plan to develop a roadmap for future mitigation efforts. The Iowa Flood Center conducted a hydrologic analysis of the ERW as part of the watershed plan development and found that flood events have occurred in one-third of the last 75 years. Projects will be implemented in the watershed because of the long history of flooding challenges it has experienced.

Contact Jody Bailey for any questions or comments you may have about the English River Watershed project. 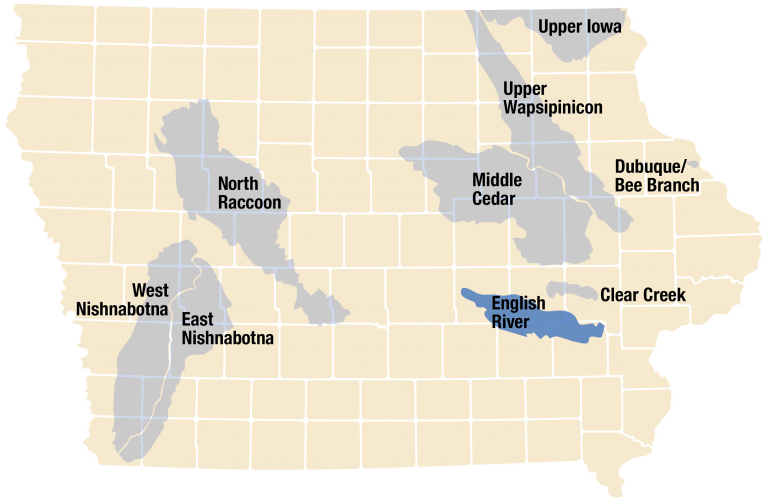 English River Watershed In the News