Kevin Kuehner and Ruth Stortz of Decorah, Iowa, are the definition of neighborly. The two families have shared a property line for years, and when Kuehner heard of a program that could benefit them both, he quickly shared the news. 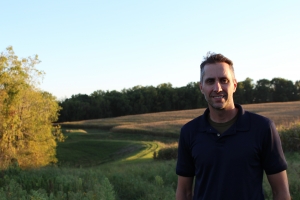 Kevin Kuehner stands next to the installed flood mitigation practice on the Stortz property.

Kuehner, a hydrologist with the Minnesota Department of Agriculture, has a background in runoff monitoring and watershed management. As a former member of the Fillmore County Soil and Water District in Minnesota, one of his primary duties was helping local farmers with flood control and water quality practices.

Several years ago, Kuehner noticed a need for flood control measures on his own farm.

“Twenty years’ experience helping farmers better understand and address runoff, [and] I was experiencing similar issues on our own land,” Kuehner says.

After each rainfall or snowmelt event, water ran quickly from the Stortz property onto Kuehner’s land. Over time, the water began to create a gully, washing away more and more soil. As the events continued, erosion extended the gully, and it eventually made its way onto the Stortz property. The gully soon made the land along the property line inaccessible, and with continued flood events, the problem was only growing.

Kuehner noticed the expanding issues and reached out to the Stortz family and Upper Iowa Watershed Project Coordinator Matt Frana. Frana guided them toward the Iowa Watershed Approach (IWA) program, which provides financial assistance to landowners to install conservation practices in order to reduce flooding and improve water quality.

Stortz and Kuehner said the IWA cost-share program is what allowed them to move forward with the project since cost was the main barrier they faced. 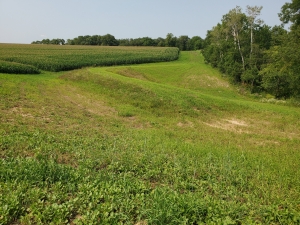 Installed water and sediment control basins and grassed waterways on the Stortz property.

Frana assessed the area and suggested the landowners install two water and sediment control basins (WASCOBS) and two grassed waterways on the Stortz property to temporarily store water from rainfall events. Now, when runoff does occur, it is far more controlled, allowing the water to slow down and reduce erosion rather than rushing through, taking soil along with it.

Both landowners say the structures properly store water from rainfall events, and that they are happy with the outcome.

“Looking at the before pictures versus the after, it’s just a night and day difference. It’s a great example of neighbors working together for the land and watershed.” Kuehner says.