Over time, both New Zealand and Iowa have moved from their native ecology to a more intensively managed, agriculture-based ecosystem. In New Zealand, the water ran clear as recently as 20 years ago, whereas in Iowa, environmental challenges date back more than a generation. Mark Kennett was born in New Zealand but moved to the United States with his wife after completing school. 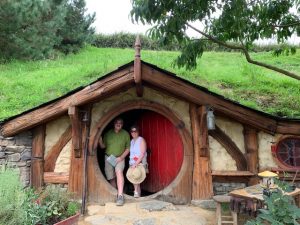 They both come from farming families — Kennett’s in New Zealand and his wife’s in Iowa. Together, they now run her family farm in Poweshiek County a few miles outside of Grinnell. After living most of his life as a farmer in these two locations, Kennett has a unique perspective on the changes he has witnessed.

Kennett does his part to make sure he is heard in the community, serving on at least six separate boards representing his county and personal interests. Kennett says it’s the neighborly thing to do because in a small, rural community, finding people to take on leadership positions can be difficult.

“People are busy, and it takes a lot of involvement to satisfy all the county government roles that need to be executed,” Kennett says.

Kennett has been an active member of the English River Watershed Management Authority board since its creation in 2013. On this board, he represents the Poweshiek County Soil and Water Conservation District. He saw the value in creating a group dedicated to connecting communities along the same body of water. Generally, the fate of water is unknown once it passes over county lines simply because counties do not discuss their shared waterway.

Kennett saw the position as a way to open up lines of discussion between the people who rely so heavily on a shared water source. He stresses the importance of keeping everyone’s interests in mind, especially when they make an effort to voice an opinion. He especially enjoys interacting with the young adults because when young people get involved in politics, they can help shape their own futures. 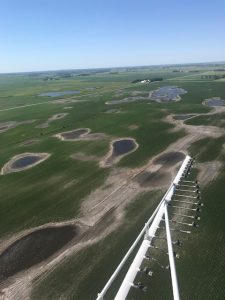 An aerial view of flooded potholes as Kennett pilots a helicopter for his agribusiness Kennett Ag Services.

Kennett found that life in a relatively small watershed makes everyone more aware of the consequences of water-quality and water-quantity issues. While Poweshiek County sat dry at the top of the hill, excess water flowed away down into Kalona and Riverside, affecting the communities in a direct and visible way. Open lines of communication between the communities allows the towns to discuss the issues and work toward a common goal of reducing flood impacts.

“We’re very fortunate in the English that it’s relatively small. We see the top of it and the lower reaches of the watershed, and the performance of one helps or hinders the other,” Kennett says.

Water quality is quickly becoming an important issue in today’s political mainstream, with agriculture typically taking the brunt of the criticism. As a farmer, Kennett has a first-hand perspective on the issue. New technology designed and tested in New Zealand to measure nitrates in the soil will soon be available with the hope that it can reduce nutrient loss from the fields. Kennett is hopeful that technology such as this can help farmers while also improving water quality.

Moving forward, Kennett hopes Iowans will treat water sources with more respect. He believes a focus on the benefits of water will create a culture that protects natural resources rather than simply using them as a waste elimination tool. New Zealand puts time and energy into water recreation, something Iowa lacks. Policy, technology, and young adults are vital to change the culture around water in Iowa moving forward.